I have these projects. One summer I worked hard and dogged the roots of Couch grass (Elymus repens (Agropyron r., Elytrigia r.)) deep from the ground. I brewed ale with it. I still have it left in the cellar. It tastes awesome. At least so far. In my next project I am going to malt some corn, heat the smokesauna and roast them. English Bishop Olaus Magnus writes in his book, which he wrote in the 16th century, about the people in the north and their way of brewing ale. 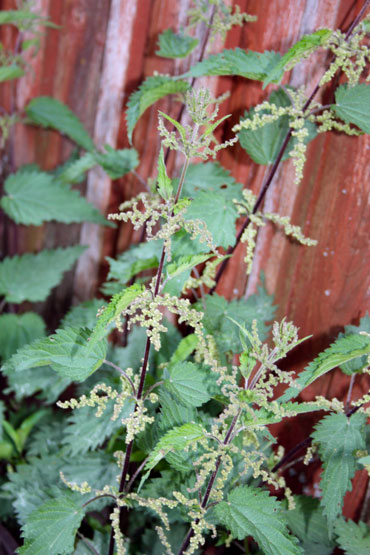 The spring is coming, so I made a choice and chose the subject of this recipe page to be the Nettle. Nettle is very good herb for many purposes. On these busy days many are strongly stressed and too busy and therefore have an aching stomach. Modern medicine does not even help. The suitable cure for an aching stomach is a nettle. It works for me. I am sure it works for You, too. And then a bit of medieval history about a nettle:

In medieval Europe the herbalists of Antiquity and their books were famous. Dioscrides and Galen were read over and over again. From Finland there is a so-called 'the Herb Book of the Cloister of Nådendal' survived from the 15th century. Some medical herbs are introduced there, for example juniper, myrrha, mustard, rue, sage, wormwood, nettle, myrtle (marsh tea?), camomile and cress. The unknown author's sources were probably a Danish doctor Henrik Harpestraeng and an Englishman Macer. (Erkamo)

In medieval England people believed that nettle could treat almost anything, for example hemorrhoids. It was used to heal wounds and stop bleeding. Nettle tea was drank to increase blood circulation and mother's milk. They claimed that nettle keeps the hair on head. People ate nettles in sauces and soups and made souffle, porridge, wine and ale from it. Nettle was made into ropes, fabric and whips. It was common to fatten hens with nettle seeds. (Talbot, p. 146) 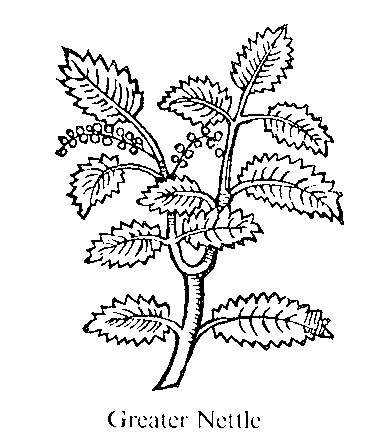 Henrik Harpestraeng (in 13th century Denmark) tells that: 'Nettle slices small pieces and cooked with acetum and eaten without salt cleans all the liquids in the stomach and kills all worms in there (which are very dangerous if they are plenty) which comes from eating raw fruits. If it is mashed with salt and egg yellow and chicken fat and put on when taking bath into human body it will release all rash if this is to be continued until three days.' (translation into Finnish Mari Voipio, into English my own)

In folklore (19th and 20th century Finland): Young, 10-15 cm high plants are tasty if used as a spinach. They have lots of vitamins and minerals. You may use nettle as tee, too. As a medicine it is a cure for example for anemia, as wrapped put with white wine to cure rheumatism and body aches. Young plants cooked in milk are to cure digestion problems. Externally to for example hemorrhoids and bleeding nose. Juice from fresh leaves are to put into skin at your head to prevent hair leave. Nettle juice keeps hands white and refreshes the skin in the face. With fresh or dried nettle you may cure lifeless hair. It is good for all hair types, because it softens and increases the shininess of hair. Nettle is an old fiber plant, which has been used in weaving. Before flowering its fiber-rich peel cooked in soda water is good for making paper. Dye plant. (Aaltonen)

Tasty but not very period receipts

I have included some nice receipts for You. They indeed are not very authentic, but the point is this time to increase Your wiliness to try, and that You learn to think about Nettle-herb and its (medical or so) properties. As I already wrote above, our ancestors were able to use Nettle in many, many ways. You, who visit this page: it is about a time for You to learn, too. Copy a recipe, cook or brew and enjoy! And remember to collect Nettle in the spring and dry it for next autumn and winter for Your food and drink.

This is a quick version of ale-brewing I have invented in the mind of experimentation. I liked this immediately so much that nowadays I brew it every summer. One of my best ales, definitely! Nettle ale does not keep long, though. Unlike berry and herb ales, nettle ale must to be drunk soon, its taste gets old in less than three months and soon after that it develops an unpleasant taste. 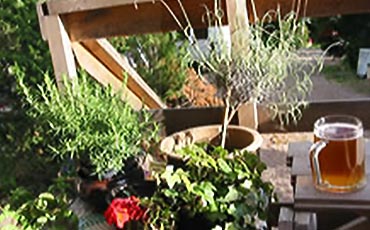 Put the extract into the container. Rinse the fresh nettles and cook them in 4-5 liter of water for a while. Throw both the nettles and water into container, add sugar and mix well. Add fresh water until the total amount reaches 19 liters. Put the ale yeast into the top, close and remember to fill the water lock. After five days bottle it. Keep cool in a cellar. 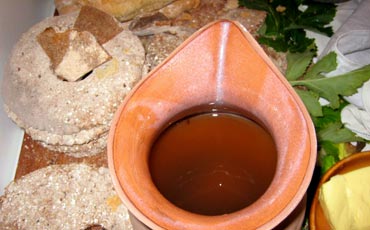 Rinse the nettles and cook them soft in a small amount of water. Mash them. Put nettle, its water, lemon pieces (you may use the yellow part of the peel, too, but not the white) and sugar into container and add the rest of the warm water . Mix. Let cool into hand-warm and add yeast into the top. Close the container (no water lock is needed) and let it stay in warm place for over 1-2 nights. Put the mead into bottles and keep cold for a while before serving.

This is a soup my mother cooked every summer when I was a child. I usually serve cooked eggs with this; the taste of this soup is much like spinach soup. Yes, you need a tiny bit of sugar to keep the balance! If you want to make a sauce to eat with potatoes, eggs and fish, use less milk (and add some chopped onions when flour). That is also delicious; I ate, and eat, that every summer, too. 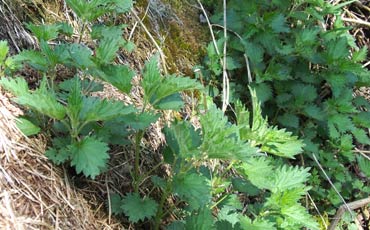 Prepare the nettles. All the parts of young nettle that are above the ground are edible. If nettle is older, do not use the hard stalks (when your nettle bush grows too high and old, cut them all and wait a few weeks: you'll get youngsters again!). Melt butter and cook flour in it at least 1 minute. Add liquid little by little and nettles too. Spice it. Let boil some time.